This page is an Index for the cards in my New Possibilities Tarot deck. Most of the text you read is from the book I wrote to support the deck back in 1995.

I chose lyrics from songs in my personal record collection to express something from each of the Major cards. Where many people try to make Tarot seem very arcane, magical or feathery, I wanted to show that these cards express core parts of our psychology that are as relevant today as any time in the “idealized” past. Some of my cards have different names. I offer the common name in brackets. 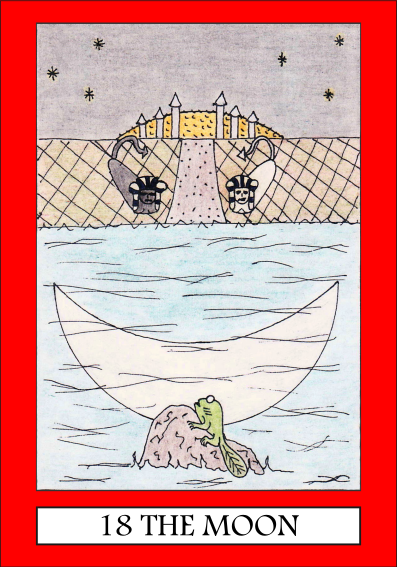 My Court cards are slightly different as I see them as the interaction of a pair of elements and how that expresses itself in human nature. I have never intended these to represent a littoral person, more character traits or decisions.

Overview and how the deck came to be

I made the deck by hand around 1993-4. I don’t know the exact dates. Each card was drawn in pencil on a ruled page. All of these were carried around in a binder with plastic sleeves. The work was done between clients in places like Mystic Charm and in my studio at home when not making music.

Once I was happy that the designs were correct, I inked over them with a common biro (probably a Kilometrico Papermate as I always liked them). The images were then colored using normal pencils. The final stages were to cut the images out and stick them to a colored photocopy paper backing that suited the card. I deliberately didn’t want to use fancy materials for my deck. It was always to be a working animal and not a purebred.

The last stage was to take the cards to a commercial laminating shop where each was sealed in plastic and returned as a card. The cards bent in the process from heating the glue. Initially, this was a shock for me but as soon as I started using them, I realized it was just part of their unique character.

The Fool’s Journey is the name given to following the 22 Major Arcana cards in order as a story. I made a music album around this in early 2020: